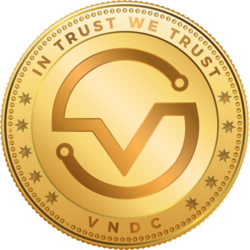 "VNDC is a stablecoin of Vietnam Dong on the blockchain smart contract system, pegged to VND by the rate of 1:1, so that the price of digital currency assets could be stabilised. It is supported by sufficient cash and equivalent assets. VNDC is a stable digital currency system that is based on the ERC20 standard of Ethereum platform and BEP2 standard of Binance platform. Our vision is becoming a stable coin for Vietnamese community, backed by sufficient assets, and always on par with Vietnam Dong on 1:1 exchange rate. VNDC is not only a stable coin but as well as gateway supporting users to convert their fiat money to stable coin (and vise versa), in line with the global blockchain movements. VNDC is the first stable coin of Vietnam, and the first Stablecoin that offer staking at 12% annual rate. This system then can be utilised as a mechanism for trading and hedging in global crypto capital markets, as well as, preparation for the upcoming global stablecoin movements. VNDC consists of VNDC Reserve and VNDC Network. Commercial users, resellers and issuers are required to involve in VNDC Reserve or VNDC Network, and sufficiently backed all the issued tokens on a fully reserved basis. VNDC blockchain gateway can be found at vndc.io. VNDC Reserve and Network can be applied directly with VNDC or one of our key partners."